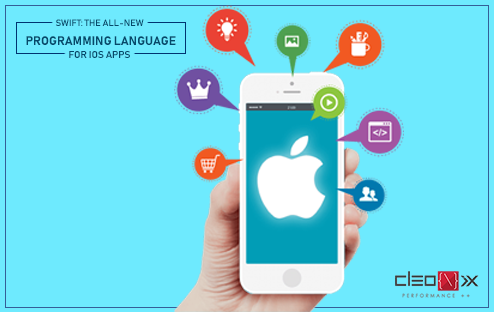 Getting a mobile app developed is no more a rocket science. A trusted development partner and a great programming language such as Swift will help you get an app you’ve always dreamed of. Thus, all you need is to choose a dynamic programming language that will help in the agile development of your application and get you going through some simple steps. While Objective C++ and Swift are the two most powerful language for iOS app development, there are certain thought-provoking facts that make the latter a preferred option for you as well as the developers. Lets, find out why.

1. Quick and powerful
Swift programming language has been purposely made fast using LLVM compiler and hence offers high-performance. It is the successor of C and Objective C, for which it is combined with low – level primitives such as types, operators, object-oriented characteristics or flow control. All of these help developers achieve the performance they wanted.

2. Simplicity of Syntax
While the main goal of developers who have loads of projects in line is to get a highly accessible and feature-rich language to make things easier for them. The Swift code is a major plus for them as it is extremely brief. Also, lesser code means better readability and lesser vulnerability to errors.

3. Easy adaptability
Using Swift provides you with the interoperability of Objective C. You are empowered to build new apps using Swift code, incorporating out-of-the-box features and intuitive functions. Being the lightweight and compact programming language with less coding, it is not at all cumbersome and is easy to adopt, even for the novice developers.

4. Support for dynamic libraries
There is dynamic libraries support in Swift unlike Objective C. In other words, this reduces the complexities in development and trims down the size of the app which accelerates the speed of downloading in the mobile devices.

6. Less coding
The reduced coding in Swift is primarily due to its support for higher-order functions. It comes with many features that are unusual in any other programming language, such as nested and anonymous functions, idioms and closures. These help in creating simple expressions in just short one line. Furthermore, Swift also decreases the amount of code used for creating repetitive statements or to manipulate the string.

While iOS 12 version is out which is the result of too many iterations after the version 10 and 11, it’s time for you too to get ready with a more convenient, light and full-featured language for iOS apps development. Thanks to the new language Swift and its powerful features, which the developers seek for. With these above key advantages, it has become the most potential programming language that future favors for building immersive, customer-centric and intuitive applications.